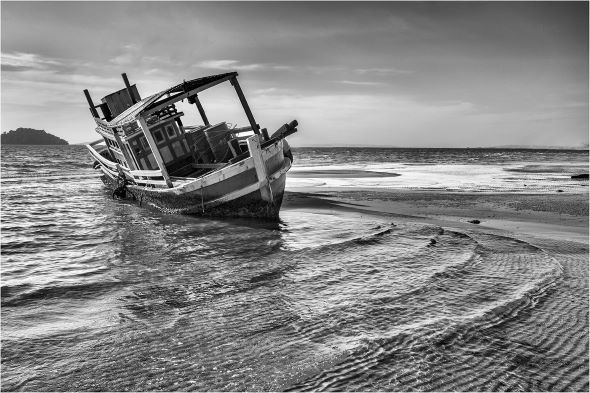 Winner Monochrome: Jill Toman's "Waiting for the Tide"
Previous
Next

Dan and Martin make their mark!

Judge John Scaife praises the standard of work on show in the DPI Open
17/05/2019
John Scaife expressed his pleasure at being asked to judge our May competition, the Open DPI, and said how much he enjoys visiting the club, which he describes as “friendly and welcoming.” He had certainly given much time and energy to scrutiny of the entries for both the colour and monochrome sections, and his considered comments and feedback were both insightful and useful for those striving to improve. We hope he got some good shots of the spectacular moon on his return journey to Weston Super Mare!

John is a self-confessed minimalist, with a penchant for good composition and use of negative space. His advice regarding possible improvements to viewpoints, or to crops in post processing, was well informed, and will undoubtedly make us reflect more on these aspects in future. He certainly appreciated the efforts made by members, and was very positive about the standard of work submitted.

Open competitions always produce diverse subject matter, and by their very nature, are not easy to judge, but John’s final selections deserved the acclaim, and will be available to view shortly on the society’s website.

In the colour section Bill Collett’s portrait “Sam 15”, Diana Walker’s landscape “Clouds Over Jokulfidir”, together with Jenny Short’s portrait of a Town Crier with his escort entitled “Oh Yeay!” were all Commended. Jenny Short’s “Misty Morning” landscape and Jill Toman’s “Attending the Fishnets” were awarded Highly Commended. Third place honours went to Jill Toman with “Monks Enjoying Free Time” and Suzanne Ladd achieved a second place with her interior shot of “St John’s Cathedral , Malta”. The winner was newcomer Martin Jeffries with a long exposure showing the glory of the Milky way entitled “Good Heavens Above”.

It was good to see some new names amongst the recognised best in the final competition before the summer break. Meetings in the last two weeks in May will feature talks by Jeremy Richards on “Wildlife in the Falklands” , by Mike Martin entitled “People and other Stuff”, and four group visits are planned for June.