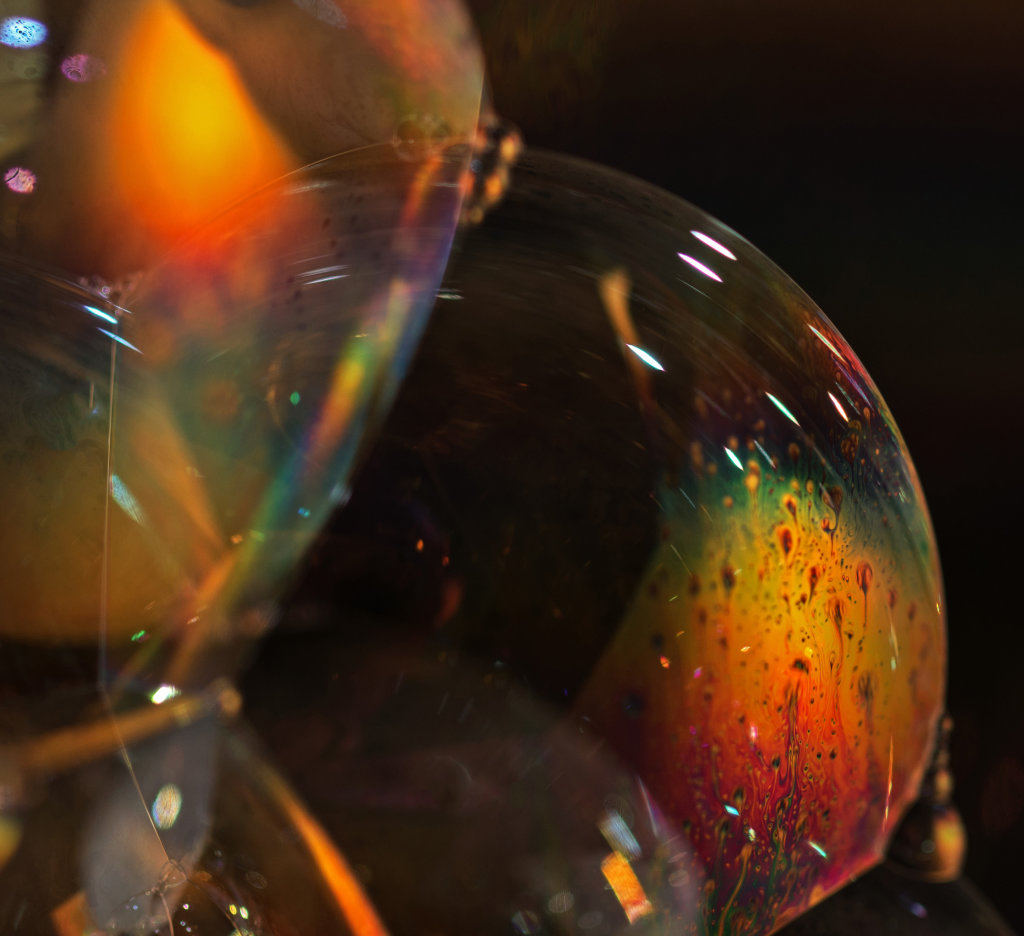 "The beauty of bubbles" by Jenny Short
Previous
Next

18/01/2019
With all that is going on elsewhere in the world, the time period leading up to Christmas is fast becoming consigned to distant memory. However, club members happily cast their minds back to the practical workshop that they enjoyed on 6th December, and shared the photos, taken on the evening itself and since then, as a result of the experience.

Exploring the mysteries of photo-elasticity clearly intrigued the majority, and many had subsequently collected a range of clear plastic materials with which to play in order to produce abstract imagery, vibrant with colour. The ever-excitable Graham Nicholls made good use of the plastic trays and moulds that packaged Christmas fayre, and his polarised mince pie cases and close ups of CD boxes conjured images in the imagination of lurking lions and hot air balloons! His energy and enthusiasm are boundless. Rex’s graphic arrangements using clear discs and plastic figurines were highly creative, and other domestic items such as the top of a food processor were put to good use. Those attending Thursday’s meeting who had missed the session were keen to find out how it was done, and Ralph’s images of the set up on the evening clearly illustrated the technique.

Members clearly took on board the new skills and applied them to their own unique interests and knowledge of wider photography and editing. Geoff Noad’s thoughtful, minimalist approach produced an impressive tryptic and Jane Richardson played with her basic shots, applying processing filters to good very effect. What is clear from their comments is that members found learning the new skill both thought provoking and liberating, and revelled in the elements of surprise generated by a simple rotation of their polarising filter.whilst focusing on familiar objects lit by computer screens. Selecting the final images for this category in the Tri Battle later in the year will be interesting. We have yet to see some images from regular members. Amongst others absent last week, Ivy Goatcher, and Jill Toman (off on a ski trip) will undoubtedly have some ideas of their own to share.

Of course there were other activities on offer that evening, and Jenny Short’s photos reminded us of the full range of activities that had been available using everyday objects, mirrors and light boxes creatively. Diana Walker’s images in particular showed how she had spent a great deal of timecapturing light trails created by suspended torches as well as playing with colours in bubbles and practising fine focus and depth of field techniques with a tray of M and Ms and water on glass. All a far cry from her usual outdoor subjects, and she was not the only member requesting another evening with time to play with the other things she had missed.

Next week’s evening with Graham Nichollls sounds intriguing with the title “Do you believe in fate?”, and it looks as though the annual dinner and awards the following week will be well attended. We are hoping that our Chair and former Secretary Margot and Mike Witcombe will catch up with us there, as we have missed them in recent weeks due to ailments.
Jenny Short 11.01.19
Next
Previous