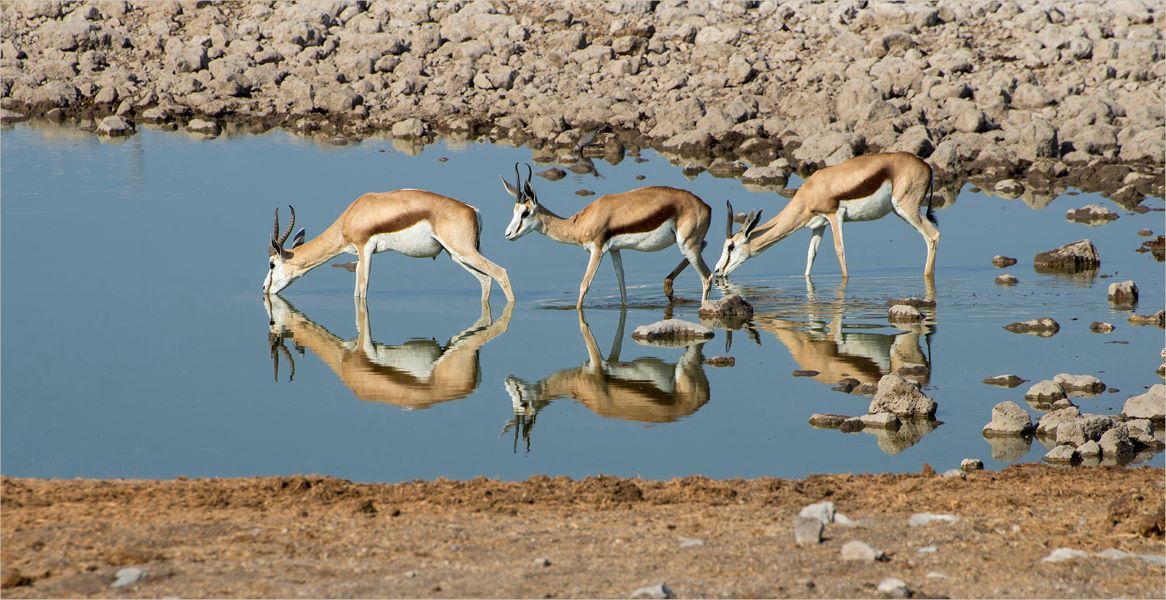 Reflections at the waterhole
Previous
Next

Laughter and Landscapes from Namibia

Suzanne and Geoff's 2019 trip to African deserts.
24/01/2020
Suzanne Ladd led our club evening on Thursday, and began with a light hearted look at how she reconsidered and edited a couple of images critiqued by members at the last meeting before the Christmas break. Ably assisted by Geoff Noad on the projector, Suzanne then narrated the presentation she had put together for us, featuring their trip last year to Namibia.

We are used to Suzanne’s often unusual view of the world through the eye of her camera, but this presentation was largely a skilful travel documentary that told the story of the land and its people, their traditions and their landscapes. However, she still could not resist the odd quirky point of view with “up close and personal” shots of seal flippers, Pelican plumage, often zooming in on the fascinating textures and shapes of the native rocks, flora and fauna.

Flying to Johannesburg and then on to Windhoek, from where they launched their exploration of Namibia, Suzanne and Geoff had limited time to explore the larger towns via streets named after dubious benefactors Castro and Mugabe, but they photographed the gardens and game parks close to their hotels, before boarding the inevitable guide led jeeps. and heading out to the less hospitable, dusty desert regions, for which the country is famed.

The travellers enjoyed sundowners under the stars and fine “brai” dining, which is such a feature of African holidays. They benefitted from the expertise of the safari guides who sought out Rhino, Cheetah, Giraffe and Lion. Suzanne got to practise her wildlife photography with shots of Oryx, Kudu and Impala as well as the smaller lizards and snakes of the deserts, and the ever-impressive Chameleon. She also got to follow her passion for landscapes and the people in them, amongst the sweeping vistas of the dunes, capturing the curves and colours of the ridges, the textures of the rock formations, and the isolation of the thorn trees, against a setting sun. There was considerable contrast further north, where Suzanne captured portraits of the primitive Himba and Herero tribes with their children, and also in the boat trip where they traversed the ugly container docks to encounter the Seals and the Dolphins with Pelicans in their natural habitats.

This was an informative, entertaining and unusual set of images, that added up to a delightful evening concluding with a three -minute visual presentation of the unique desert landscapes, accompanied by haunting African music courtesy of Geoff himself.

Next week we have a visiting speaker in Richard Price with a presentation on Iceland, and we are hoping that perhaps Norton Radstock residents and their friends who might be interested, will come along and spend the evening with us at the cost of £3 as it will be an event to enjoy. Just turn up for a 7.30 start at the Midsomer Norton Social Club at the top of the town and introduce yourself.