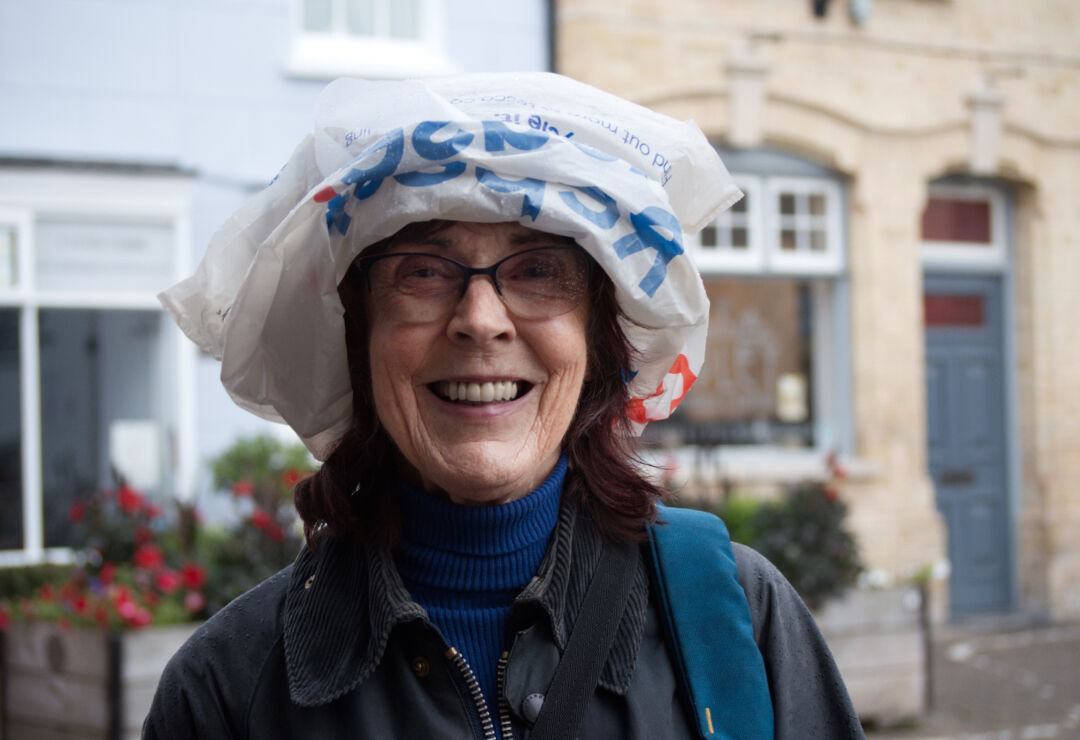 A walk round Axbridge.

Undeterred by the weather the exploration continues.
30/07/2021
Neither the prospect of a shower, nor the change of planned venue, deterred the majority of our regular Thursday evening walkers from gathering in the car park at Cheddar Reservoir under fairly dramatic skies. As usual, the need to just chat superseded any photography initially, but as we approached the sailing clubhouse a fluffle (yes, that is the correct term!) of wild rabbits, and a shoal of windsurfers caught the eyes of members, who were soon clicking away under darkening skies. With only a handful of dog walkers out and about, there was little to inspire us, so we headed back to the carpark, which even the skateboarders had deserted.

Arriving in Axbridge, most sheltered briefly under the eaves of King John’s Hunting Lodge, although the ever inventive, Pamela, defiantly sported some ingenious wet weather headgear! This imposing Tudor building is now a National Trust Museum- one we vowed to return to when open. Also, amongst the delights of the mediaeval market square, we found the “Back To The Future-like” Town Hall, that featured in the Nat. West adverts of the nineties, and then headed for the Church of St John the Baptist that towers above the NE corner of this attractive open space. Originating in the 13th century, the beautifully restored building stands in an attractive graveyard, last resting place of a WW1 soldier from the Dorset regiment in the War Grave dedicated to him, and also of thirteen local people who, we discovered, sadly died in an air crash in Switzerland back in the 70s.

We smiled over the headstone proclaiming that the occupant had “rested long in peace until his wife joined him” some years later, and then headed back up the High Street that sported so many intriguing features rooted in the town’s history.

We searched for the Roxy Cinema in Horn Street, proclaimed on the town’s website to have an art deco box office, and to be one of the smallest in the country. Sadly, this has fallen victim to the Pandemic, and is no more, so we eventually abandoned to the outside space of the local hostelry. Here we mulled over the forthcoming Annual Dinner at Odd Down next Thursday, and discussed future plans to keep the spirits of the NRPS high, as the need to be cautious when meeting in numbers continues into the Autumn.

Sadly, our President Margot Witcombe cannot join us for our celebratory dinner, but we know she is pleased with the way the NRPS is currently operating, and we like to think that her late husband, Mike is also smiling.